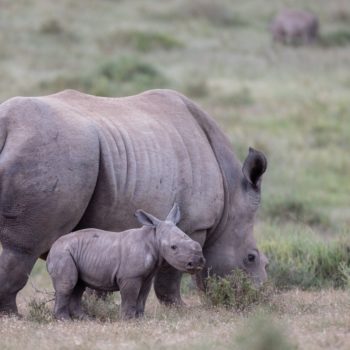 The amazing survival of the Rhino, Thandi, at the Kariega Private Game Reserve is nothing short of miraculous! On the night of 2nd March 2012, she was one of three Rhino poached on the reserve. The poachers darted them and then brutally hacked the horns off Thandi’s face leaving a huge gaping wound. BUT she was alive!

Even more miraculous is that Thandi, disfigured beyond belief just short of nine years ago, is flourishing. After this terrible ordeal, she has just given birth to her fourth offspring. The beautiful baby Rhino is yet to be named. The baby is very healthy and obviously happy, but sticking very close to mom at all times.

A name for the baby?

We had the pleasure of visiting Kariega as a family one year ago for a spectacular three-day Safari. We saw so many different species of animals including Thandi, and when my nine-year-old daughter Zuri saw the pictures of the baby Rhino, she immediately came up with the name of Tira. The creative mind of youth is very active. I am sure that the owners and management at Kariega will decide on a truly fitting name for this new addition. The amazing survival of the Rhino Thandi will require that a strong and powerful name be sought for this baby.

The beauty of Kariega

Kariega Private Game Reserve is privately owned since 1989 and is located in the Malaria Free zone of the Eastern Cape. The reserve is being developed and improved constantly to deliver ever higher standards for a truly authentic wildlife and safari experience. The Lodges are beautiful and you have a choice between five different locations depending on your personal desire. The Game Reserve is spread over the deep ravines of the coastal region. This landscape also provides for ever-changing vistas while you are out on a Game Drive with your Ranger. You can never be bored on the three-hour long Game Drive.

Visitors to the Eastern Cape Safari areas have a variety of great experiences to choose from. Choose to be a Sustainable Traveler and combine your Safari with a travel itinerary from Cape Town and include the scenic Garden Route for a memorable holiday.

News from the EPICENTRE of Omicron

On Monday 10 August we were all celebrating World Lion Day. These powerful majestic animals…