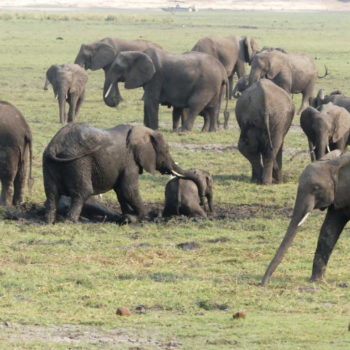 Cyanobacteria is the cause of these Elephant dying. The cyanobacteria are found in water. The officials of the Department of Wildlife and National Parks announced this in a news conference in Gabarone on Monday, 21 September. The principal veterinary officer Mmadi Reuben confirmed that their latest tests have detected cyanobacterial neurotoxins to be the cause of deaths. Not all Cyanobacteria produce toxins. Climate change drives up global temperatures. The prevalence of these toxins being produced increases in the higher temperatures.

Mr Cyril Taolo, the Deputy Director of the Department of Wildlife and National Parks also confirmed that the number of dead Elephants found so far has increased from 281 to 330.

There are still many unanswered questions. Why is it only Elephants that have been affected? Why only in that particular area? The Lions and the other species of mammals living in the Okavango Panhandle are seemingly unaffected by this Cyanobacteria. This remains unexplained.

It is a fact that the temperatures across Southern Africa are rising at twice the global average. The potential impact of cyanobacterial blooms is a real concern to scientists. This is as a result of the increase in temperatures that these bacteria prefer. Given the right conditions at the right time and the right place and these species of bacteria will increase rapidly. Some of these cyanobacterial blooms can harm people as well as animals.

The really scary part is that Southern Africa is heading into summer now. This toxic bacterial bloom took place in early winter. What lies ahead as the temperatures rise dramatically in the summer months? Are we going to see more cases of Cyanobacterial bloom producing deadly neurotoxins? What other species of wildlife are going to suffer a similar fate to the 330 Elephants in the Okavango Delta Panhandle?

In a recent report, 25 dead Elephants were found In the neighboring country of Zimbabwe. This was in the Hwange area on the country’s western border with Botswana. Poaching was ruled out as the tusks are still intact on the carcasses.

The dead Elephants are close to water. The authorities believe that they could have ingested toxic bacteria while they were foraging for food. There is no clear indication that cyanobacteria are the cause of these deaths at this time. Zimbabwe has sent samples for scientific analysis to Britain and is awaiting results from further testing.

The global Elephant population has declined significantly due to the increase in poaching. In Botswana on the other hand, the Elephant population has increased steadily to around 130,000. Chobe National Park and the Okavango Delta in Botswana remain the premier location for Elephant viewing. There are a variety of Safari Packages to choose from such as the mid-range Victoria Falls to Okavango Delta Safari. Contact the team at Africa Explore Safaris to design your unique Private Luxury Safari.

The African Big 5 are to be respected

As a respected Safari Operator, I always accompany my guests into nature to view the…

Going on Safari in Southern Africa?

“Going on Safari in Southern Africa?”….. Was the often used greeting to our new friends…

When we travel again after COVID.