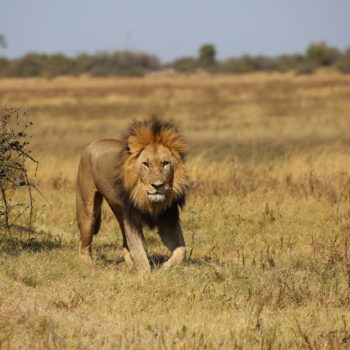 On Monday 10 August we were all celebrating World Lion Day. These powerful majestic animals are truly spectacular. Especially when you are able to observe them in wild out on the African Savanna, on their home range. It is quite impossible to establish the exact number of Lions left in the wild. As we are celebrating World Lion Day we must take note that their existence is under severe threat.

We know that Lions have become extinct in 26 African countries. They have vanished from around 95 percent of their historic range. Experts believe that there are less than 20,000 Lions left in the wild. The State of the Lion is under severe threat. Why? There are a few reasons for this. The most important is the loss of habitat due to the ballooning human population. We know, and history confirms, that whenever and wherever humans and wildlife meet and are competing for resources, wildlife will ALWAYS lose!

Now add to this the single most damaging characteristic of all creatures on this planet. A trait that only humans possess. GREED! Human greed has led to the worst possible exploitation of Lions. We celebrate World Lion Day, but there is a whole industry established in South Africa and neighbouring territories where Lions are bred and housed in cramped overcrowded, filthy enclosures to serve the greed of the human race. They are destined for Canned Lion Hunting and the lucrative trade in their bones.

You don’t know what “Canned Lion Hunting” is? Cubs are born today as you celebrate World Lion Day. They will join an estimated population of 10,000+ Lions held in captivity in South Africa alone. These cubs are usually removed from their mother within one week of being born. They will be hand-reared while the mother, pining for her lost cubs, goes back into estrous to be mated with a male lion and the cycle is perpetuated.

The Lion cubs are taken to another facility that is often given the emotive title of “Sanctuary”. The cubs are hand-reared and habituated to humans. This is often by willing volunteers who have been duped. They are given the story that these poor little cubs were “rescued” and it is now our “responsibility” as humans to care for them. Unsuspecting tourists are encouraged to pay for the privilege to pet the cubs. They can walk with the sub-adult Lions and take many selfies to share with their friends. The sad fact is that these Lions are now habituated to humans. They will NEVER be released back into the wild.

Should this helpful volunteer or free-spending tourist want to follow the progress and growth of the cute little Lion cub featured in their selfies, a shock awaits them. They may well discover that this Lion will be a magnificent fully grown specimen in their prime at around 12 months old. This Lion has usually been pumped full of steroids to speed up their growth. Now the Lion is advertised in magazines and on the internet as a beautiful specimen for a TROPHY HUNT.

Cash flush hunters from around the world pay huge sums of money to come to Africa to kill this Lion. The Lion is probably drugged on the day of the organized hunt and then taken out of his cramped enclosure to be placed out in the bush. Mr or Mrs brave hunter arrives and is accompanied by a large crew. This comprised of at least a tracker and a local professional hunter to ensure the client’s safety. The tracker, leading the way will follow several little bush paths that may take an hour or two to negotiate. Eventually, he leads the brave hunter to where the Lion has been placed in the bush. Then the supporting crew steps aside so the brave hunter can do the killing that he has paid for.

The joke is that the hunter has traveled from very far away to shoot his / her trophy. But the hunter’s “trophy” is not the whole animal because the head, feet, and hide of the animal is usually the allowed part of the “trophy”. The breeder/operator will retain the carcass. The soft tissue is stripped from the skeleton probably for pet food industry. The Lion skeleton is then placed out in the sun so the bones can dry out. The bones are shipped off to Asia at a huge profit to be used in the Tiger Bone industry.

The organization Blood Lions lifted the lid on this cruel trade. They have launched a Global Awareness Campaign named 800 VOICES FOR 800 LIONS. Will you get involved and help our Lions? Above all, you may be the ethical and responsible Tourist and travel on ethical and authentic Safaris. Do not support any facility that promotes any kind of personal interaction with a predator. You are probably playing a part in signing their death warrant.