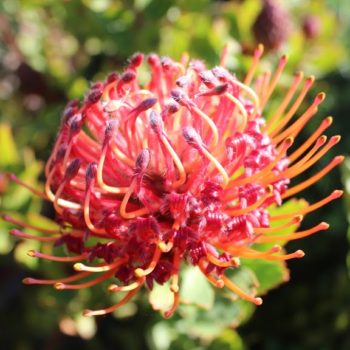 The Cape Floral Region located at the Southern tip of Africa

South Africa carries the title of being home to the world’s hottest hotspot, The Cape Floral Region located at the Southern tip of Africa. This beautiful and majestic floral kingdom is the only one to be fully contained within a single country. The Cape Floral Region is a biodiversity hotspot comprising 13 protected areas in the Western and Eastern Cape provinces. It includes the city of Cape Town’s Table Mountain National Park, Boulders Beach which is home to a colony of African Penguins, and the Cape of Good Hope at the Cape Peninsula’s tip. Kirstenbosch National Botanical Garden, located on the slopes of Table Mountain, is home to many of the local fynbos plants, as these plant species are known locally.

Incredibly, The Cape Floral Region has the highest known concentration of plant species in the world. The Cape Floral Region has an impressive species count of 9,600 plant species. Even more remarkable is that 70% of these species grow nowhere else on earth. Its nearest rival, the South American rain forest, has only one third the number of species.

Restricted growing locations or ranges are a characteristic feature of the species in this hotspot. Some of the plant species have a total range being smaller than half a soccer field. It goes without saying that plowing a field or building a single house in this hotspot can decimate the entire world population of a unique form of life.

The Cape is also home to many charismatic animal species. It has a particularly high reptile and amphibian diversity. One such species is the rare Geometric Tortoise (Psammobates geometricus). It is one of the most threatened tortoises in the world having lost 97 percent of its habitat to agricultural expansion. The hotspot is also home to many rare, endangered and unique frog species. Such as the elusive Table Mountain Ghost Frog (Heleophryne rosei), which only occurs on Table Mountain and has one of the most restricted ranges of any amphibian in the world.

The highly transformed Cape Flats area outside Cape Town, has the highest concentration of Red Data species in the world and is the leading site for metropolitan species extinctions globally, with fifteen species per km2 being in danger of extinction.

This World Heritage Site is by far the smallest and the richest of the World’s six floral kingdoms, but it is also the most threatened. Alien plant infestation, too frequent fires, commercial afforestation, and agricultural and urban expansion has transformed 80 percent of the landscape. This has left scatted fragments of natural vegetation, across the Cape, harboring high numbers of endangered species.

The OMICRON invasion The Omicron invasion is sweeping across the world! What do we know…

Wine Tours in Cape Town. Immerse Yourself in the Local Splendour of the Cape Winelands…